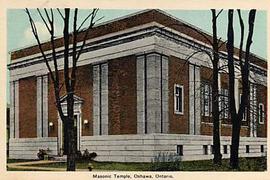 The enthusiasm generated for the construction of the new Masonic temple in 1928 seems to have prolonged its architectural integrity. This is an attractive and symbolic landmark at 91 Centre Street South, in Oshawa's downtown.

Symbolism and Use
Like the fraternity, Masonic buildings are shrouded in an antiquity and symbolism. The identification of a Masonic building as a "temple" is largely because of the prominence of King Solomon’s temple in the Ritual. Taking seven years to construct, Solomon's temple was finished in 960 B.C. to house the Ark of the Covenant and serve as a permanent dwelling place for Jehovah, the Lord God. It is said that when the Ark was safely seated and the holy vessels lodged within the temple, God filled the Holy House with a cloud of glory to signify that He had taken up residence there. The temple overlooked Jerusalem until 586 B.C. when it was destroyed at the command of the King of Babylon. Repeatedly ruined and rebuilt, the remaining fragment of its outer wall now forms the holy Wailing Wall of Jerusalem.

In Masonry, the term "lodge" is a Middle English word used to mean both a meeting place for Masons and the Masons who meet there. When the great cathedrals of the Middle Ages were being constructed, the masons had special, temporary buildings built against the side of the cathedral. There they met, received their pay, planned the work on the cathedral, and socialized. This building was called a lodge.

As a charitable fraternity that conducts its meetings in ritual, there are parameters for the allocation of space within a Masonic temple. The Oshawa example was built with the required Masonic quarters, anteroom, lodge rooms, and regalia room. It also was designed with a banquet hall, auditorium, and the modern feature of a projection room for motion pictures. It was intended to serve the dual purpose of Masonic lodge and community meeting place.

The date stone on the front facade reads: Masonic Temple  MCMXXVIII [1928]. Some repairs and replacements were undertaken in the mid 1950s.

Style and Form
In the 1920s, Modern Classicism was a popular style. Its influence is evident in the Oshawa Masonic temple:

Here again are large public buildings following the classical theme. They have symmetrical main facades, flat or nearly flat roofs, a monumental order of pilasters (but no columns) across the front, and prominent plinths and entablatures, all executed in white stone or artificial cast stone. Sometimes the classical motifs of pilasters and entablatures are extremely simplified, so that the surface of the building is a grid of horizontal and vertical lines.  Smaller public buildings are often faced with brick, with contrasting stone trim. The execution is quite different [than Beaux-Arts] in that the classical features have been flattened or linearized, rather than being something three dimensional.

The Modern Classical style was in contrast to the flamboyant Edwardian Classical and Beaux-Arts styles from earlier in the twentieth century. Erected in 1928, the Oshawa temple was part of a period of post First War restraint or "chased simplicity" in architecture. It predates the austerity that followed the economic depression triggered by the failure of the stock market in 1929.

In form, the building is square, three storeys, with a flat roof. Positioned on a downtown corner, the temple was designed with two prominent facades facing Centre and Metcalfe streets. An aluminum clad, triangular shaped extension has been added to the rear (east) façade.

Foundation
The foundation is poured concrete.

Masonry
The masonry is a combination of slightly variegated, golden-yellow or buff colour, cut stone and brick. The base is smooth, cut stone that forms a continuous plinth or base course for solitary and paired channeled stone pilasters positioned along the two prominent facades. Each pilaster culminates in a Doric capital, giving the illusion of columns supporting a horizontal stone entablature. The wall massing between the pilasters and between the entablature and roof is brick. Above and below each of the larger window openings is a rectangular shape outlined with raised brick.

This decorative masonry is not on the rear façade. On the north façade, there is no entablature and the lower level is obscured by vegetation.

The roof is flat and edge-trimmed in stone. Brick chimney stacks rise from grade to above the roof level on the north and east facades. Several metal vents, that may be original, are mounted on the roof.

There are no window openings on the front façade. The rear façade is partially covered by a metal addition that may be enclosing any original openings. The north façade is obscured by vegetation. The façade facing Metcalfe Street and Memorial Park has three large flat window openings flanked by a smaller opening on each side. Small square openings within the base course are vertically aligned with the main windows. The multipaned sashes are stylized as transoms with sidelights.

In a Greek Revival style, the main door case has a plain pediment resting on a cornice that incorporates partial pilasters. Within and below the pediment are carved stone garlands and motifs symbolic of Masonry. Above the pediment is a round carved date stone featuring the Masonic emblem. The entrance doors are solid, double leafed. Above the doors are five vertical panes forming a transom. Each door has the Masonic symbol in blue and gold. The monumental design of the door case is in keeping with the presentation of the building as a temple.

When selected, the building site had a natural beauty of mature vegetation, including two stately elms. The building was designed with large windows to view the picturesque setting of Memorial Park on the south. The location at Centre and Metcalfe remains within the heart of the city, facing E.A. Lovell school, the public library, the Robert McLaughlin Gallery, and City Hall.

The temple appears to be in near original condition and continues to serve local Masons.

The Need for a New Temple

By the 1920s, local Masons were finding their meeting accommodations inadequate. The question of constructing a new Masonic temple was prompted when R.W. Bro. Dr. T.E. Kaiser of Lebanon Lodge proposed that his property (later the location of the Biltmore Theatre about 43 King Street East, demolished) be sold to a Temple Company. He was confident that enough shares could be sold to finance the erection of a new temple building.

Kaiser's proposal was declined by the membership but a second option for a site at the northeast corner of Centre and Metcalfe streets emerged. This led to the creation of Oshawa Temple Building Ltd. with the Rt. Wor. Bro. George Hart as president. A meeting of lodge members was held on November 2, 1927, and on December 14, it was agreed that the corporation would negotiate the purchase of the Centre and Metcalfe parcel. An initial $5000 was advanced by Very Wor. Bro. R.S. McLaughlin to make the purchase.

Oshawa Temple Building Ltd. was incorporated on February 15, 1928, by Letters Patent under the Ontario Companies' Act. It had a share capital of $100,000 divided into 4000 shares at $25 each. Shares in the corporation were sold only to Masons to finance the land purchase and construction of a new temple.

On March 8, 1928, the Oshawa Daily Times published a sketch of the "Proposed New Masonic Temple." It was reported that local Masons gathered in the General Motors Assembly Hall and heard the "spirited" address of Lt. Col. W.N. Ponton, K.C. of Belleville. Ponton was "prominent in Masonic circles of two continents." He promoted the new temple as "the headquarters of masonry in the district, and its shrine and home in Oshawa, the 'city of homes.' The temple will be an asset to the city, he said, and its erection will show a civic patriotism as well as a loyalty to the order." Ponton was particularly pleased with the location, paying "tribute to the beautiful war memorial, within sight of which the new temple will be erected." The estimated cost was $65,000.

On April 10, 1928, the deed was issued for a lot with a frontage of 85 feet on Centre Street, and a depth of 125 feet along Metcalfe. It was bought from Julia Ann Hinkson by Oshawa Temple Building Ltd. for $13,500. Hinkson had inherited the property and house in July 1912 through the Daniel Lick estate. The first Temple shareholders' meeting was held on May 3, 1928, and it was agreed that demolition of the Hinkson house would begin at the expiry of the tenant's lease on June 11. By mid June, demolition was underway.

Oshawa architect, C.C. Stenhouse, was retained to draw the plans for the estimated 60' x 85' building. It was to be brick and tile, with steel beams and columns, and stone trimming on the exterior. The final design was completed in association with William Lyon Somerville.

The cornerstone of the new temple was laid on August 13, 1928. The basement was excavated and a solid concrete foundation laid. The construction contract was awarded to a local firm, W. J. Trick Company Ltd. From 1896, W.J. Trick was considered a leading builder and contractor in Oshawa. About 1908, he established an industry known as the Oshawa Interior Fittings Company. It manufactured fittings for banks, libraries, offices, and public buildings. Trick was mayor of Oshawa when it was incorporated as a city in 1924.

By December 1928, the roof was being positioned and most of the brickwork was finished. On May 10, 1929, the new lodge was dedicated. The cornerstone and dedication ceremonies were performed by the Grand Master M.W. Bro. John S. Martin of the Grand Lodge of Canada in the Province of Ontario. The first meeting of the Oshawa Masons in their new temple was on May 28, 1929. It continues in Masonic ownership and use.